Go back to: Home / Formula 1 / Hamilton takes the win in Canada 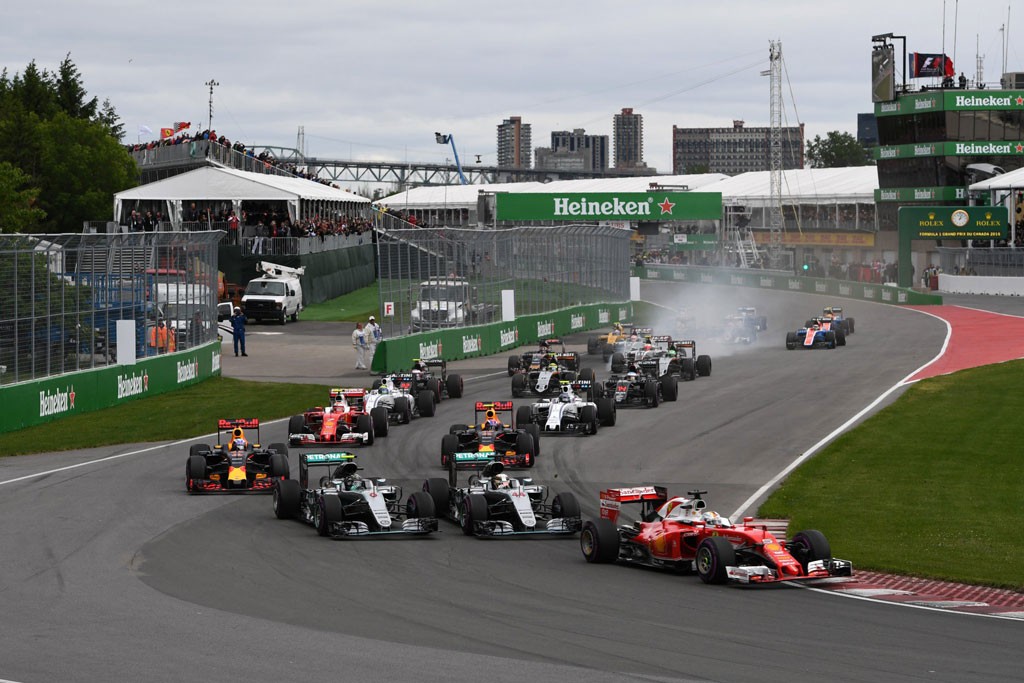 Lewis Hamilton won the Canadian Grand Prix for Mercedes after overcoming the threat of Ferrari’s Sebastian Vettel, who led twice but was thwarted by a two-stop strategy that didn’t work out.

Hamilton won for the fifth time around Montreal’s Circuit Gilles Villeneuve, and his one-stop strategy worked out perfectly for him after a poor start from pole position.

“Float like a butterfly, sting like a bee – that was for Ali,” said Hamilton on his in-lap.

Vettel rocketed into the lead, swerving around both Mercedes off the start line, but the decision to pit under an early Virtual Safety Car, which consigned them to a two-stop strategy, failed to pay off.

Although he had fresher tyres for the final stint, Vettel was unable to close the gap to Hamilton.

Valtteri Bottas took an unlikely podium for Williams, as his challengers were all unable to pull-off one-stop strategies.

World championship leader Nico Rosberg suffered another difficult race, being pushed off by Hamilton at the first corner. He battled back from 10th, but a slow puncture and an overheating car restricted his recovery to fifth, behind Max Verstappen’s Red Bull.

A spin on the last lap, while trying to pass Verstappen, didn’t cost him a place.

Despite pre-race drizzle, the race started in dry conditions with all runners on slicks.

Hamilton led from pole ahead of Rosberg – the fourth Mercedes lockout of 2016 – but Vettel simply rocketed around both of them to lead into Turn 1.

There, Rosberg was shoved out by Hamilton, who bumped wheels with his teammate, rejoining ahead of Red Bull’s Daniel Ricciardo and baulking him into losing a place to Verstappen.

Vettel led Hamilton, Verstappen, Ricciardo, Kimi Raikkonen (Ferrari) and Bottas. Rosberg was down to ninth on the opening lap, then slipped another place to Nico Hulkenberg.

Like in his old Red Bull days, Vettel pushed hard early to escape from Hamilton’s DRS reach. The German straight-lined the chicane at the end of lap one, but retained his lead.

Hamilton set fastest lap on lap five as he zoned in on Vettel, briefly getting into DRS range, but Vettel escaped it again. He led by 1.3s by lap 10.

Verstappen dropped 7s adrift by this point, with Ricciardo right on his tail. “Do not hold Daniel up please,” Verstappen was told.

Vettel pitted on lap 12 just as the Virtual Safety Car for Jenson Button’s retirement came to an end, rejoining fourth behind the Red Bulls on supersofts, with Raikkonen also pitting too.

He caught Ricciardo, who was on well-worn ultrasofts, and passed him on lap 16 with a brief lock-up at the Turn 10 hairpin.

Vettel DRS-ed past Verstappen for second, and began to reel in Hamilton who was 10s clear. Vettel lapped almost a second per lap faster at this point on far fresher rubber, and carved into his lead – helped by Hamilton running wide at Turn 10 on lap 24.

Hamilton pitted a lap later for softs, promoting Vettel back to the lead – holding a 13s advantage.

Hamilton began to outpace Vettel from lap 28. “Get this traffic out of the way!” complained Vettel, after losing 1.2s to Hamilton on lap 30.

By half distance on lap 35, the gap from Vettel to Hamilton was 10.1s.

Hamilton then banged in a new fastest lap, gaining 1.2s on Vettel as he pitted for the final time on lap 37 for softs.

He rejoined in second, 7.4s behind. On rubber that was fresher by 13 laps, Vettel began to close the gap – setting a new fastest lap on lap 41 to reduce the gap to 6.5s.

“What the hell is going on?” ranted Vettel as Romain Grosjean’s Haas almost turned in on him while he was lapping it at the chicane.

With 20 laps to go, the lead gap was 5.2s and got to within 4.3s with 13 to go when he locked up and straight-lined the final chicane, opening the gap out to 5.8s. Another trip over the run-off a few laps later meant any hopes of a grandstand finish were dashed.

Raikkonen pitted for softs on lap 34, releasing Ricciardo who’d lost 6s on Verstappen while stuck behind him. He had Bottas and the recovering Rosberg on his tail.

Ricciardo straight-lined the chicane just after half distance, losing a place to Bottas as a result.

Rosberg DRS-ed past on lap 39, just as Ricciardo pitted again for more softs – due to a flatspotted tyre – and it was a slow stop that dropped him to seventh.

Verstappen pitted for a set of ultrasofts with 23 laps to go, dropping him to fifth, which promoted Rosberg’s battle with Bottas to third. But Rosberg’s attacks were complicated by warnings on his dashboard, which his engineer told him “were real”.

Rosberg then suffered a slow right-rear puncture with 18 laps to go, costing him his shot at the podium and dropping him to seventh.

Bottas cruised to third place unopposed for his ninth career podium for Williams.

After dropping to 10th by lap two, Rosberg eased past Fernando Alonso’s McLaren with DRS on lap three, regaining ninth. After a trip across the kerbs at the chicane, he later repassed Hulkenberg for seventh (gaining a place as Raikkonen stopped early).

Rosberg pitted for softs on lap 22, rejoining eighth and gaining seventh with a pass on Perez, who had started on softs and was running a long first stint.

On the softs, Rosberg set a sequence of fastest laps, gaining places from Massa and Ricciardo before his puncture set him back again.

Rosberg passed Ricciardo with 15 laps remaining for sixth, and outbraked Raikkonen at the chicane three laps later for fifth.

He lapped over a second a lap quicker than the leaders in his pursuit of Verstappen.

Verstappen put up a magnificent defence, refusing to concede to Rosberg at the chicane and first corner lap after lap.

Rosberg tried a desperate attempt on the penultimate lap, but spun as he tried to drive around the outside of Verstappen at the chicane. He recovered to finish fifth.

Fighting for the last points

Behind Raikkonen and Ricciardo, Nico Hulkenberg’s Force India had a quiet race to eighth, ahead of Carlos Sainz Jr’s Toro Rosso – from 20th on the grid – and Perez.

Fernando Alonso’s points chances were blown by a disastrously-slow 8s pitstop, dropping behind both Toro Rossos and Grosjean’s Haas – who had passed his teammate Gutierrez for 12th on lap 10.

Alonso finished 11th for McLaren – despite radio-ing in to ask if he should stop late on. Daniil Kvyat was 12th for Toro Rosso, ahead of Gutierrez and Grosjean, and Marcus Ericsson’s Sauber.

Button, who started on supersofts, was the first retirement when his McLaren caught fire. “Engine’s gone guys,” he reported. “It just went pop. Lots of smoke and sparks.”

Renault’s Jolyon Palmer was the next out, with a water leak, while Felipe Massa retired his Williams with an overheating engine.