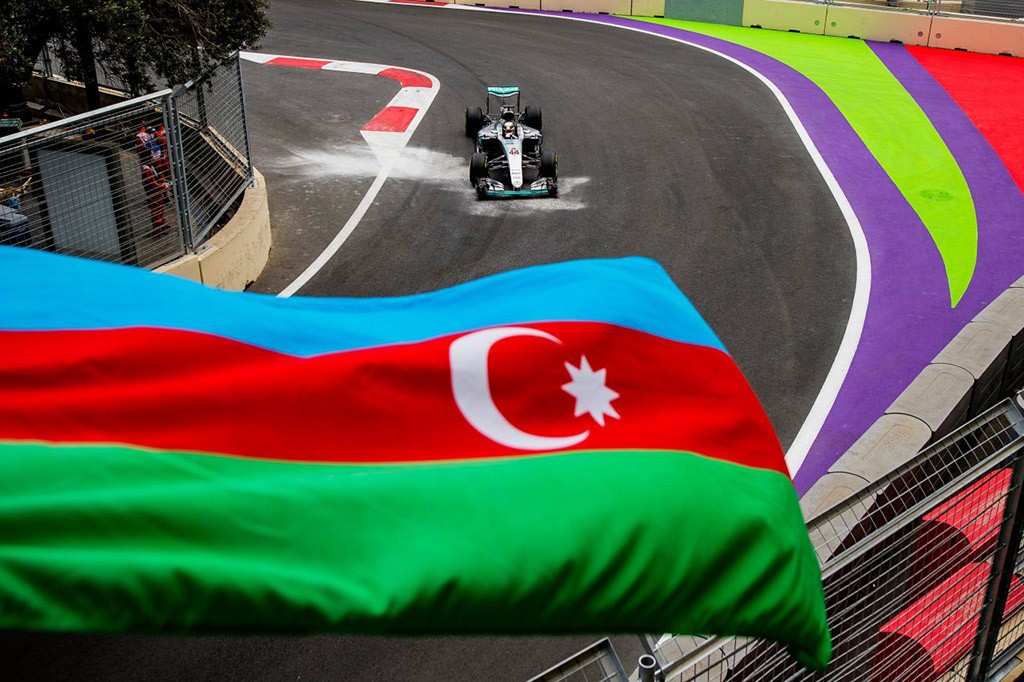 Nico Rosberg won the first ever F1 race on the streets of Baku, dominating the European GP from start to finish to beat Ferrari’s Sebastian Vettel, while Mercedes teammate Lewis Hamilton only managed fifth after struggling with his car’s ERS modes.

Rosberg extended a huge lead in a mighty first stint, and by half distance was 20 seconds clear of the chasing Ferrari’s. He scored his 19th career win by 16 seconds.

Raikkonen allowed Vettel to pass him for second, just after half distance, but Vettel could do little about the dominant Rosberg.

Raikkonen suffered some late-race problems, and Sergio Perez passed him on the final lap to stay the final spot on the podium for Force India.

Hamilton could only manage fifth, after complaining bitterly about his energy recovery system settings that his team wasn’t allowed to help him with, due to the radio message ban.

From pole position, his third of the season, Rosberg led Red Bull’s Ricciardo and Vettel on the run to Turn 1.

Raikkonen was fourth, ahead of Perez, Felipe Massa (despite a big lock-up at Turn 1) and Daniil Kvyat’s Toro Rosso. Haas’s Esteban Gutierrez hit Nico Hulkenberg (who was starting on softs), who just held a massive slide.

Rosberg led lap one by 1.2s over Ricciardo. Further back, Kvyat was passed by Max Verstappen on the opening lap for seventh with Hamilton still back in 10th after making no progress off the start – even getting briefly passed by McLaren’s Fernando Alonso.

Kvyat blocked Bottas’s first attack for eighth, but couldn’t hold back his second. Hamilton then passed Kvyat on lap four, with Romain Grosjean’s Haas pushing Kvyat out of the points moments later.

Bottas passed Verstappen for seventh at Turn 16, but Verstappen and Hamilton came back at him with DRS on the start/finish straight. Bottas somehow hung on, as Hamilton nipped by Verstappen, who now had Grosjean to contend with.

Vettel DRS-ed past Ricciardo for second with ease on lap six, as Verstappen pitted for softs.

Ricciardo pitted on lap seven, releasing Raikkonen and Perez into third and fourth.

Raikkonen picked up a huge blue plastic bag: “There was some [bleep] plastic flying around, I had to avoid it.”

“Are you sure about this? Pace is looking good,” questioned Vettel when told to pit on lap nine. Raikkonen pitted instead, as Vettel stayed out for a long first stint.

Rosberg was 10s clear out front at this point, with Hamilton over 20s behind him.

Hamilton passed Bottas on lap 11, as we had the remarkable sight behind them of Pascal Wehrlein’s Manor momentarily passing Raikkonen’s Ferrari for eighth.

Raikkonen was pinged with a 5s penalty for crossing the white line on the pit entry as he was slipstreaming Ricciardo, who was pitting.

Ricciardo passed the long-running Hulkenberg for sixth on lap 13.

Hamilton, who was 30s behind Rosberg at this point, reported a vibration from his brakes before his first pitstop on lap 16. Perez pitted a lap later to cover Hamilton.

Raikkonen pulled a great move on Hulkenberg for fifth on lap 16, and closed in on Ricciardo again.

“Let’s have him,” urged engineer Dave Greenwood, and Kimi obliged at the start of lap 19, pulling a nice move on the Red Bull.

Perez and Hamilton passed Massa on lap 20, moving up to sixth and seventh respectively – and they gained a further spot when Hulkenberg pitted for supersofts.

The next battle was Ricciardo-Perez-Hamilton, with Ricciardo having nothing for the Mercedes-powered cars on the start/finish straight on lap 22.

Despite recording the fastest top speed of 226mph (363kph) with DRS early on, Hamilton was stuck behind fourth-placed Perez.

Hamilton explained of his lack of pace: “Derates everywhere, I’m sure that’s not helping – you guys need to pick up the pace,” he said of his paucity of kinetic energy available.

Second-placed Vettel pitted for his first stop on lap 21, and leader Rosberg covered him a lap later. He rejoined 21s clear of the German, with Raikkonen in between them, 19s behind Rosberg.

Vettel caught Raikkonen on lap 28, with the Finn pulling aside to promote his teammate into second. “But now you tell him to push,” said Raikkonen. Vettel responded with a new fastest lap.

Rosberg was 18.7s up the road at this point, with Perez 4s behind Raikkonen. Hamilton slipped 6s further back in fifth.

Behind them, Ricciardo pitted for mediums and became mired in traffic, which Hulkenberg ahead of him – on supersofts – was able to carve through. That allowed Bottas to run a solid sixth, ahead of Hulkenberg, Ricciardo, Massa and Verstappen.

Vettel closed the gap to Rosberg to 14s, who was simply managing the gap and could extend it at will.

Perez was closing on Raikkonen, keen to stay within 5s of him to grab another podium, with the unhappy Hamilton slipping back and complaining: “I’m looking at my frickin’ dash every five seconds. I’m gonna try and change everything.”

Hamilton fixed his issues with eighth laps remaining, setting fastest lap: “Thank [bleep] man – I got my power back!” – but the problem appeared to return a lap later.

Bottas finished sixth, ahead of Ricciardo – who grabbed seventh from Hulkenberg with three laps to go. Verstappen then nabbed eighth from Hulkenberg, having earlier passed Massa, with McLaren’s Jenson Button just missing out on a point in 11th.

Felipe Nasr finished 12th for Sauber, despite hitting the wall on lap 19.

Grosjean was 13th, ahead of the Renaults of Kevin Magnussen and Jolyon Palmer, teammate Gutierrez, Marcus Ericsson (Sauber) and Rio Haryanto (Manor).

Kvyat was the first retirement with a suspension failure, and teammate Carlos Sainz also suffered a similar suspension-related failure.

After another strong showing, Wehrlein went out with a lack of brakes with 10 laps remaining.

Alonso was forced out late on with a gearbox downshift issue.

Championship standing as of the Europe Grand Prix.